May 29, 2011
The 10th Annual Patrick Dennehy Rumble in the Bay Basketball Tournament tipped off at Cupertino High on Saturday. The event features 40 teams in two divisions. Pool play concludes on Sunday morning while the playoffs begin in the afternoon. The final rounds of playoffs will crown the respective division title winners on Monday.

Little Reg Shooting Stars' Coach Reggie Vaughn is the uncle of former Sacramento High Travon Abraham. He confirmed that Abraham is leaving Rice and transferring back to the west coast.

Team Jennings Black is sponsored by Brandon Jennings and coached by former Syracuse guard Jason Hart. The club normally features 2013 prospect Isaac Hamilton of Crenshaw High (Los Angeles) but he was playing with the Oakland Soldiers this weekend. However, Skylar Spencer of Price (Los Angeles) was in attendance and the 6-foot-8 interior player has a good wingspan and ran the court well for his size.

Here is a list of the top performers we saw:

Thomas Peterson 6-foot-7 PF St. Francis (Bay Area Ballers 17U) 2012: Big body and not afraid to mix it up in the paint. Rebounding, shot blocking, and defense will be his calling card. Peterson can complement Drew Dickey and could return the Lancers in a position to challenge Mitty's size. According to Coach Washington, Peterson is still raw and very new to the game as he was mostly a baseball player. But Washington believes Peterson can be a low Division 1 or Division 2 prospect.

Jayland Hicks 6-foot-1 PG Sheldon (Lil Reg Shooting Stars) 2013: Hicks was often overshadowed by the Sheldon varsity players and the other 2013 prospects. Watching him in a primary showed that he is a long, lanky point guard who can take the ball to the basket and disrupt passing lanes. If Sheldon plays a multi guard set, Hicks could thrive in that setting.

Kelan Cameron 5-foot-9 PG Sacramento (Lil Reg Shooting Stars) 2013: Cameron is the cousin of fellow Dragon Aaron Cameron. Kelan is a solid leader and can get to the basket easily. The Dragon backcourt looks to be set for the next few years in Sacramento.

Andy Simanek 6-foot-4 PF Half Moon Bay (NP Force) 2012: Bruiser and interior physical play. Against a bigger Team Jennings, Simanek held his own and was fearless in challenging them on both ends.

Brian Raenter 6-foot-5 PF Mountain View (Bay Area Ballers 16U) 2013: Solid rebounder and has good mid-range shots. He has been primarily a volleyball player up till now. Mountain View could be an under the radar team for next season.

Ken Opamuratawongse 6-foot-0 PG Mitty (Mosley's Mavericks 15U) 2014: Mitty loses their backcourt to matriculation. Opamuratawongse is a left-handed guard who is very shifty. Only a freshman, he has good size - think of a taller left-handed Colin Wan. Expect him to compete for minutes in the rotation in the Mitty backcourt.

Nick Callazo 6-foot-3 SF Sacred Heart Prep (Mosley's Mavericks 15U) 2014: Sacred Heart loses the McConnell twins to Division I. Callazo plays tight end on the football team. He is raw in basketball but the physical toughness to play inside is there.

Deion Ellis 6-foot-3 F Skyline (Norcal Panthers) 2014: Ellis is probably transferring to San Leandro. His wing span and athleticism key his defense. He is still raw on the offensive end as he only started playing in the seventh grade. If he gets taller and polishes his skills, then he could be an interesting prospect.

Tyrone Gaines 6-foot-0 G Fremont Oakland (Norcal Panthers) 2014: Gaines is a good scorer and shooter. He may need to slow the game down sometimes in his decision making. But the raw skills, size, and potential are there.

Ryan Nguyen 5-foot-5 PG Leland (Norcal Panthers) 2014: Nguyen has a good perimeter game and can dribble well. He seemed very compose with his dribble and in keeping it alive.

Kamron Nafarieh 5-foot-8 PG Sequoia (Hawks) 2013: Consistent outside game that sets up his dribble drive game. Has good ball control and efficient in his play.

Markus Robinson 5-foot-11 PG Terra Linda (NBBA) 2012: Robinson is the team leader. He can go strong to the basket and take contact while still having a respectable perimeter game.

Matt Davis 6-foot-3 PF Terra Linda (NBBA) 2012: Good outside shot for an interior player and his shot blocking ability is also very good. Davis is a hustle and scrapper type of player. With Michael Best graduating, their 2012 players will need to fill in for his production.

Recruiting updates
Lydell Cardwell 6-foot-2 G Mid-Peninsula (Blythe) 2011: Cardwell confirmed that he took visits and has offers from both Azusa and Concordia. He is spending the summer playing for the eponymously Blythe club team that is run by the Eastside Prep girl's basketball coach. Cardwell showed no rust as he was comfortable pulling up on perimeter shots and taking the ball to the basket

Neil Vranicar 6-foot-5 F Archbishop Mitty (Bay Area Tar Heels) 2012: Vranicar has been invited to the Pangos event in Los Angeles next week. On his mostly Mitty laden Tar Heel club team, he displayed his inside and outside game. He will have to complement Aaron Gordon's play well in order for Mitty to repeat this past season's run. Vranicar is getting looks from west coast schools in Loyola Marymount, Pepperdine, UC Davis, and University of San Diego.

Max Schmarzo 6-foot-3 SG Palo Alto (Bay Area Ballers 17U) 2011: Schmarzo still has not lost the shooting touch as he was able to hit open, spot up looks. The Palo Alto guard will be heading to Division III Coe College in Iowa.

Momir Gataric 6-foot-4 SG Homestead (Bay Area Ballers 17U) 2011: Gataric has now gotten serious contact from Cal State Northridge and Fresno State. With a solid summer showing, these contacts may turn into offers. Gataric showed a very complete game. With his size and fearlessness of going inside, he scored in bunches for his team.

Gokul Natesan 6-foot-4 SG Cupertino (Bay Area Ballers 17U) 2012: Natesan also displayed his scoring propensity. He has a very clean perimeter shot and follow through. He looks to be working on his dribble drive game as well. Occidental has been in contact with him. 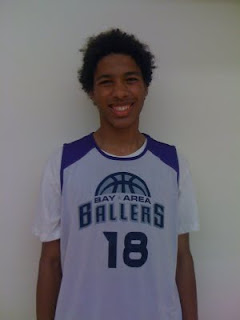