The 10th Annual Nor Cal Tip Off Classic features seven games starting at 11:00 AM on Saturday, November 26th at Newark Memorial High. Past nightcap games have bee competitive and feature high profile teams. This year’s game pits Bishop O’Dowd against a Bishop Montgomery team that is ranked nationally in the top 10 by multiple publications.
Below is the schedule of games with records from the previous season:

Game 1: 11:00 am - St. Patrick-St. Vincent (20-12) vs. Monte Vista (24-8)
Game 1 will be a battle of backcourts as the Bruins feature seniors Tavian Henderson and BJ Standley while the Mustangs have senior Austin Fadal. St. Patrick-St. Vincent tied for second in the Tri-County Rock League last season. Salesian and El Cerrito look to be the teams to challenge again this upcoming season. Other non-league games of note include Sacramento (Dec 20) and Half Moon Bay (Jan 14).
Monte Vista will be in year five under Coach Nick Jones who has broken the 20 win mark each year with the Mustangs and won the 2014 Division I state title. Last season, the Mustangs went 0-3 against East Bay Athletic League champion De La Salle. Monte Vista ended Oakland Tech’s postseason last year and will face the Bulldogs and San Francisco commit Souley Boum again on Dec 16 as an early gauge for both teams.

Game 2: 12:30 pm – Dublin (23-4) vs. Las Lomas (16-12)
Dublin is moving from the Diablo Foothill Athletic League (DFAL) to the East Bay League this season. Last season ended in an opening round loss in the Division I playoffs. The Gaels return Montana signee Timmy Falls to lead the offense while 2020 guard Robbie Beasley is a promising underclassman who has Division I written all over him.
Las Lomas lost to Dublin twice in DFAL play last season. The Knights have a promising 2018 backcourt duo in Robert Prince and Devin Payne. Las Lomas will have non-league battles with Berkeley (Dec 13) and El Cerrito (Jan 14).

Game 3: 2:15 pm – Berkeley (24-9) vs. Christian Brothers (17-11)
After a state final appearance under Coach Mark Deluca, new coach Ralph Fields will look to continue the success in Berkeley. Junior guard Ben Baker will be a potent weapon for the Yellowjackets. Berkeley faces De La Salle (Nov 30) and will battle in the West Alameda County League that features Bishop O’Dowd.
Christian Brothers is trending in the right direction as they only lost three seniors from the roster and return 2018 forward Elias King. The Falcons tied for second in the Capital Athletic League last season. Christian Brothers will have key non-league games against West Campus (Jan 7) and Central Catholic (Jan 28).

Game 4: 3:45 pm - Moreau Catholic (25-5) vs. Immanuel (25-6)
Last season, the Mariners were a senior led team with Oscar Frayer (Grand Canyon) and Terrell Brown (San Jose State). Moreau Catholic started lasted season with a thrilling victory against Sierra Canyon while ending their season with a comeback that fell short in the postseason against Sheldon. This year’s Grand Canyon commit Damari Milstead and newcomer Kyree Walker are the featured Mariners. The early season schedule is loaded with games against Archibishop Mitty (Dec 2) and the Hoophall West event (Dec 9-10 in Scottsdale, AZ).
Immanuel’s 2015-2016 season ended against a loaded Chino Hills program. But the Eagles return CSU Bakersfield commit Darrin Person along with 2018 guard Nate Kendricks. The Central Sequoia League program went undefeated in league play and will be looking for an early season signature win.

Game 6: 7:00 pm - Newark Memorial (21-10) vs. Woodcreek (20-9)
Newark Memorial defeated Woodcreek last season 78-68 in overtime in the same event. The Cougars lose seven seniors and will have to find themselves early this season. Senior guard Decaurey Brown leads them. Other non-league matchups of note include El Cerrito (Dec 10) and Modesto Christian (Jan 16).
On the other hand, Woodcreek returns two players each in the 2017 and 2018 NCP Top 40 including big time post prospect Jordan Brown, who is ranked in top ten in his class by multiple publications. The Timberwolves finished second in the Sierra Foothill League to Folsom but look to be the favorites this season.

Game 7: 8:30 pm - Bishop O'Dowd (17-15) vs. Bishop Montgomery (28-3)
The Dragons had a young team last season that had only two seniors. Bishop O'Dowd is led by a strong backcourt that includes senior BJ Shaw, and juniors Naseem Gaskin and Elijah Hardy. The Dragons will see if the youth has matured enough to handle non-league games against Crespi (Dec 22), Sierra Canyon (Jan 7), and Capital Christian (Jan 16).
Bishop Montgomery was one of the better teams in the state last year but their postseason ended against Chino Hills (84-62 Mar 19). Oregon State commit Ethan Thompson and San Diego State commit Jordan Schakel lead the Knights along with high-level junior guard David Singleton. Bishop Montgomery has a current streak of four straight 28+ win seasons that includes the 2014 Division IV state title.

After losing 11 straight in this WCAL series against Bellarmine, St. Francis came out attacking on their first three possessions as senior running back Cyrus Habibi-Likio (6-foot-1, 210 pounds) scored on a 58 yard run while senior Garrett McCarthy (5-foot-9, 170 pounds) had punt return touchdowns of 54 and 60 yards. After the 2:57 mark in the first quarter, the Lancer offense had a non-existent passing game and used the running game to melt the clock to win 21-12. The Lancer defense had several key stops and timely sacks to end Bellarmine drives as junior Tyler Manoa (6-foot-4, 290 pounds, BYU commit) had 1.5 sacks for the game.

The Bells are normally a disciplined, mistake-free team. Bellarmine's first offensive play was a botched snap that resulted in a 19-yard loss. Senior quarterback Ike Ogbogu (6-foot-1, 185 pounds) was pressured into four sacks and one interception. The Bells were held scoreless in the first half but mounted two scoring drives in the second half. But the special teams missed the first PAT that led to a failed two-point attempt on the second score after already giving up two punt return scores to the Lancers. On the bright side, the defensive unit shut out St. Francis after the first possession and the offense has senior tight end Justin Malone (6-foot-4, 220 pounds) who was a big and open target.
Posted by BBS at 7:58 AM No comments:


Four-year starters are rare at either the high school or the college level for any team sport. Even more rare is the four-year starter for programs that have successful postseason runs. For the Moreau Catholic program, senior Damari Milstead is looking to cap off such a run.

In his 17 number years of Bay Area high school basketball coaching, Moreau Catholic Head Coach Frank Knight says, “Damari's game is so unique that it’s really hard to find a player that he reminds me of in particular. But he is a cross between Kwame Vaughn (Skyline Oakland) and Will Cherry (McClymonds). Kwame and Damari both have that offensive game that's not flashy and not littered with highlights of dunks but will have filled up the stat line at game’s end. Will Cherry because of his defensive intensity and they just have that will to win down the stretch. They both will have finished high school with lots of wins.”

The chance to make a mark on the newly formed Splash City 17 program was too good to pass up on as he averaged 16.6 points, 3.1 rebounds, and 3.4 assists. The team’s inaugural season in the Under Armour circuit, Splash City made it to the championship game. Milstead says about the summer season, “Being the first year for Splash City and playing on the UA Circuit was a lot of fun and we did really well as a team in the spring as well in the summer. I feel like we put Splash City on the map and set the bar for the organization going forward.”

Coach Frank Knight provides an anecdote of Milstead’s toughness, “When Damari was a freshman and we were playing Salesian in the NCS D-4 championship game he sprained his ankle pretty bad at the end of the third quarter. Salesian started to pull away in the fourth while he was out and he was adamant on returning. After our trainer taped him back up, he walks up to me during game and said he is ready to go back in. I asked him was he sure and he said he wanted to be out on the floor with his brothers in this game. He did the same thing last season in the first round of the Open Division playoff against Sheldon. Came back with a partially broke nose, and we cut a 20 point lead to a one possession game with less than one minute remaining. He has an ultimate desire to win.”

Moreau Catholic has the chance to send another four-year starter to a Division I program. Oscar Frayer was a four-year starter who is now with the Grand Canyon Antelopes program of the Western Athletic Conference. In addition from last year’s team, Terrell Brown is at San Jose State, Brandon Lawrence is a preferred walk on at St. John’s, and Armond Simmons is at Columbia College in Southern California. Milstead’s strong summer bolstered his recruiting exposure. In addition, he was invited and attended elite camps during the summer that included Pangos All American Camp (June 3-5), Steph Curry Select 30 Camp (June 28 - July 1), and Under Armour All American Camp (July 5-8).

Knight says about his point guard’s future, “Damari has worked on every one of his deficiencies each summer, tackling one specific one each year and has really made himself a good all around player. I think what he needs to work on most to play immediately at the next level is his speed and athleticism. If he can keep improving his overall speed and agility and his ability to change pace in traffic with the ball, he will be tough to deal with.”

Knight says about Milstead’s leadership, “He is like another coach on the floor. The one final piece of development Damari has left at Moreau Catholic is his ability to lead a team. He is a winner. Now, can he lead a team that is younger, not as experienced but oozing with potential? We will learn a lot about his character after this up coming season. I’m excited on what kind of legacy he leaves here at Moreau.”

After working to improve his jump shot during the summer, Milstead will be looking to be more efficient running his team to make a deeper postseason run. His Moreau Catholic roster is young but includes Kyree Walker, Maxwell Anderson, LJ Anderson, and Dvan Molden. Look for Milstead to guide this team as he caps off a successful four-year run with the Mariners in Hayward, Calif. 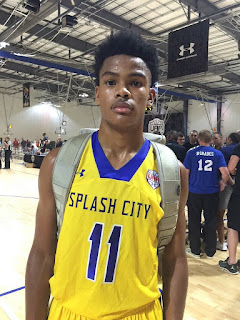